The opening weekend of the NFL playoffs has arrived, with six games on the wild-card round slate. Our NFL Nation reporters bring us the keys to every game, a bold prediction for each matchup and final score picks.

Additionally, ESPN Stats & Information provides a stat to know for each game, and the Football Power Index (FPI) goes inside the numbers with a matchup rating (on a scale of 1 to 100) and a game projection. ESPN Chalk’s Dave Bearman hands out helpful nuggets as well. It’s all here to help get you ready for a loaded weekend of NFL football.

What to watch for: The Bills are in the playoffs for the third time in four years after a 17-year postseason drought, but they haven’t won a playoff game since the 1995 season. This Buffalo team is scorching hot, however, outscoring opponents 229-110 since Week 12. Can a Colts defense that ranked in the top 10 this season in both points and yards allowed slow down quarterback Josh Allen and the Bills’ offense? — Marcel Louis-Jacques

Bold prediction: Colts quarterback Philip Rivers will have a season low in pass attempts, meaning 20 or fewer. One of the keys of slowing down Buffalo’s offense is by keeping Allen & Co. on the sideline for as long as possible. And the best way to do that is by running the ball as much as possible. Rookie running back Jonathan Taylor closed out the regular season by rushing for 741 yards — including 253 in Week 17 — over his final six games. The Colts will lean on him even more against the Bills. Rivers’ current season low in pass attempts is 21, which he had against the Jets in Week 3. — Mike Wells

Stat to know: The Bills have dropped back to pass on 64% of their first-down plays this season, the highest first-down passing rate by a winning team over the past 20 seasons. That’s up from 53% last season. Buffalo’s 2,493 passing yards on first down is the NFL’s most this season.

Matt Bowen’s game key: The Colts’ linebackers have to close the middle of the field for Allen. How? By using Darius Leonard and Bobby Okereke to sink under the deep in-breakers and force Allen to throw the ball underneath. Read more.

Betting nugget: The Bills covered six of eight home games this season, tied for the second-best cover rate at home and a vast improvement over their 6-10 mark at home against the spread (ATS) over the previous two seasons. Read more.

What to watch for: Injuries could play a big role in this one. Rams coach Sean McVay has been tight-lipped about whether quarterback Jared Goff and his surgically repaired thumb will start Saturday. Seahawks safety Jamal Adams, meanwhile, said unequivocally that he’ll be on the field for his first career playoff game. Adams’ status had been in question because of a shoulder injury. Will either or both of them suit up, and how will their injuries play a part? — Brady Henderson 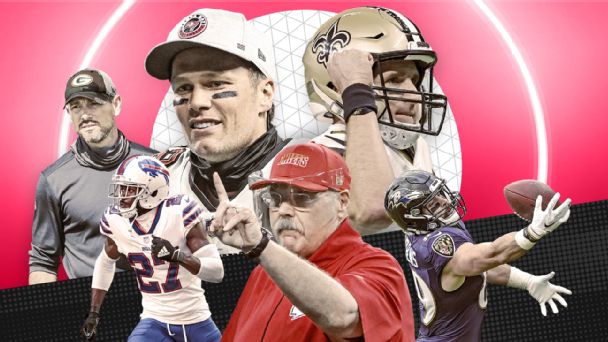 Bold prediction: Rams No. 2 quarterback John Wolford will break the Rams’ two-game streak without an offensive touchdown. Yes, Wolford. McVay won’t declare a starter before kickoff, but expect Goff to give it a try. But with Goff less than two weeks removed from thumb surgery, Wolford could very well need to step in at some point. — Lindsey Thiry

Stat to know: Seahawks quarterback Russell Wilson had six passing touchdowns of 30-plus air yards this season, tied with Patrick Mahomes for the most in the NFL. However, he went 2-of-16 (13%) with zero TDs and an interception on those throws over the last eight games of the season. And he went 1-of-6 on those throws against the Rams, who allowed an NFL-low completion percentage on deep balls this season (14.8%).

Matt Bowen’s game key: The Seahawks have transitioned back to their old-school offensive identity over the second half of the season with a more run-heavy approach and play-action throws for Wilson. Why? This passing game looks disjointed, and Seattle has to get back to more rhythm concepts that allow him to get the ball out with speed. Read more.

Betting nugget: The Seahawks were 4-6 ATS this season when favored by more than a field goal, and the Rams are 3-1 ATS when getting at least 3.5 points during the McVay era. Read more.

What to watch for: Can Washington pressure Buccaneers quarterback Tom Brady? Sacks don’t tell the whole story, but Brady is 26-7 in his playoff career when sacked two times or fewer and 4-4 when sacked three or more times. Washington defensive coordinator Jack Del Rio has been excellent with in-game adjustments and adding in wrinkles; he’ll need to add some here to cause some hesitation and allow the front four to get home. It’ll also be interesting to see if Washington’s offense can produce enough. In quarterback Alex Smith’s six starts this season, Washington has scored more than 23 points once. Will that be enough? — John Keim

Bold prediction: The Buccaneers’ offense will put up three touchdowns on a Washington defense that hasn’t surrendered that many since Week 10 against the Lions. Brady might not be the difference-maker against this pass rush, though. Rather, it will be a healthy Ronald Jones, who was denied 1,000 rushing yards to cap his season after missing two games because of a finger injury and time on the reserve/COVID-19 list. Washington’s run defense is closer to average, giving up 112.8 yards per game (15th in the league). — Jenna Laine

Stat to know: Washington ranked 31st in offensive efficiency this season at 36.1 (scaled 0-100). That is the fourth worst by a playoff team in the past 15 seasons. But surprisingly, all three teams with lower rates won their first playoff game that season (2010 Seahawks, 2016 Texans and 2011 Broncos).

Jeff Saturday breaks down how Washington’s defensive line can get pressure on Tom Brady and the Buccaneers on Saturday.

What to watch for: Titans running back Derrick Henry has been a thorn in the Ravens’ side. Henry rushed for 195 yards in the divisional-round playoff game last season and 133 yards — including a 29-yard touchdown run in overtime to seal the victory — against them this season. Baltimore will be focused on keeping Henry in check, so keep an eye on how Tennessee offensive coordinator Arthur Smith counters. — Turron Davenport

Bold prediction: Ravens quarterback Lamar Jackson will throw four touchdown passes. He has totaled three in two career playoff games combined (both losses), but the Titans gave up 36 touchdowns through the air this season, which is tied for the most ever by a playoff team. — Jamison Hensley

Stat to know: According to research by the Elias Sports Bureau, the Ravens’ 1,337 rushing yards over their past five games is the most by any team in a five-game span since the Super Bowl era began in 1966. They had 3,071 rushing yards this season, the fourth most in a season in NFL history, one year after setting an NFL record with 3,296. But none of top five teams in single-season rushing yards won a playoff game that season.

Matt Bowen’s game key: We know that Henry is going to get his touches Sunday. But if a team wants to beat Tennessee, it has to take away the big-play ability of the play-action passing game with quarterback Ryan Tannehill. Watch out for outside-zone looks with wide receiver A.J. Brown running the in-breakers. Read more.

Betting nugget: The Titans have failed to cover consecutive games when the over/under is 50-plus after opening the season 6-2 ATS in such spots. Read more.

Matchup must-reads: Remember the Titans? Ravens not thinking about past in playoff rematch … How Titans’ Henry can withstand a heavy workload to keep delivering … Jackson’s titanic hurdle: Capturing that elusive playoff win for the Ravens … Titans have had Jackson’s number, but can this defense stop him? … How to watch Ravens-Titans wild-card MegaCast

What to watch for: The Saints could potentially get both wide receiver Michael Thomas and running back Alvin Kamara back in the lineup as they look to finally peak at the right time after three consecutive years of painful playoff exits. And this could be quarterback Drew Brees’ last chance to get back to a second Super Bowl, since he might retire after this season. Bears QB Mitchell Trubisky, meanwhile, might need an impressive playoff performance to extend his career in Chicago as he heads toward free agency. — Mike Triplett 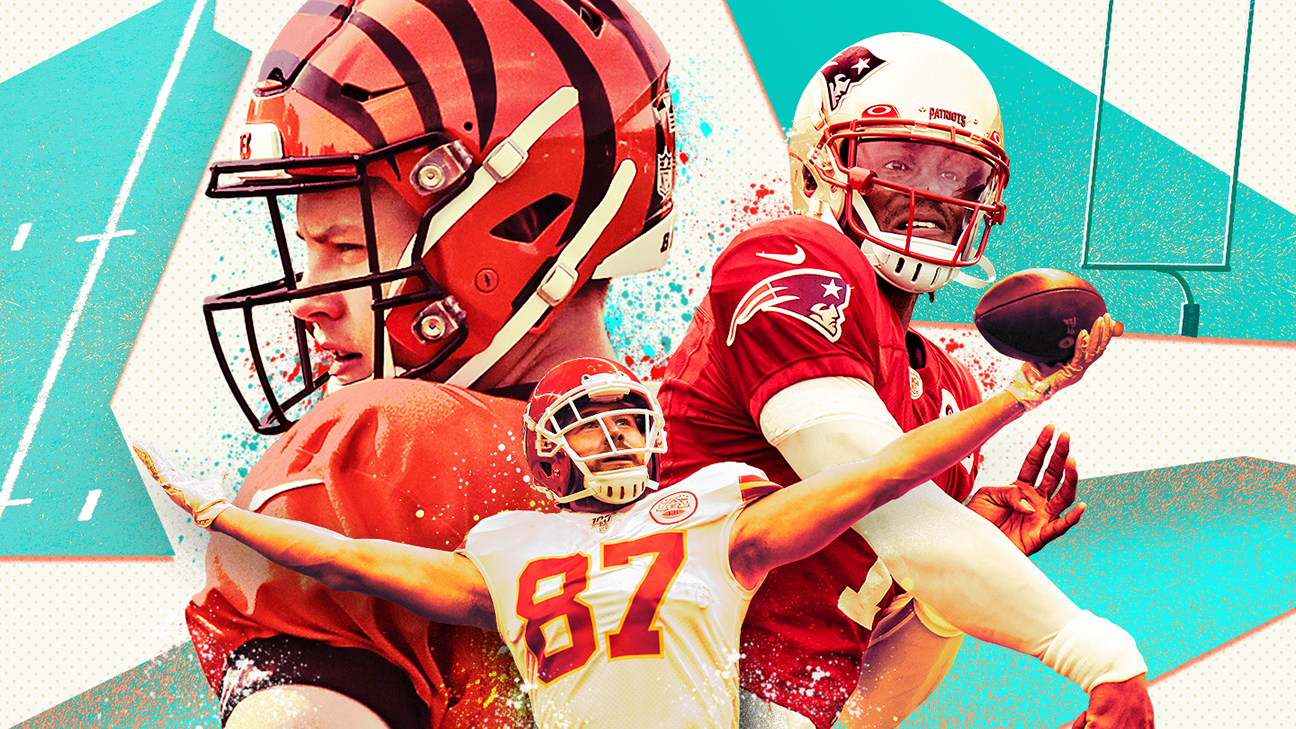 Bold prediction: Saints playmakers Kamara and Thomas will return to score three combined touchdowns. So much focus is on Trubisky and the Bears’ flighty offense, but Chicago’s defense has worn down in recent weeks. The Bears’ pass rush has been virtually nonexistent at times, even with Khalil Mack. Further complicating matters is the left elbow injury suffered last week by the Bears’ best all-around defender, linebacker Roquan Smith. Chicago’s defense appears to be in real trouble again. — Jeff Dickerson

Stat to know: Bears running back David Montgomery has scored a rushing touchdown in five straight games, the longest streak by a Bear since 1990 (Neal Anderson had five). The Bears’ offense as a whole scored 31.2 points per game over the final five weeks of the season, tied with the Saints for sixth in the NFL.

Matt Bowen’s game key: New Orleans needs to look for Kamara as a passing-game option when he is flexed from the formation in empty sets. Clear out the boundary and create that space for Kamara to run the choice/option route on a high-percentage throw for Brees. Read more.

Betting nugget: The most recent time the Bears covered in a game in which they were a 7.5-plus-point underdog was November 2017 … against the Saints. Read more.

What to watch for: Pittsburgh safety Minkah Fitzpatrick calls Cleveland running back Nick Chubb one of the “most complete” backs in the league. Once one of the best run defenses in the NFL, the Steelers have been more porous in recent weeks with injuries mounting. Linebacker Robert Spillane is back, though, and will be key in slowing Chubb. — Brooke Pryor

Bold prediction: Despite being short-handed because of COVID-19, the Browns will hang tough. But for a second consecutive week, Pittsburgh-Cleveland will come down to a 2-point conversion late in the fourth quarter. Only this time, it will be the Browns who come up short. — Jake Trotter

Stat to know: Only Aaron Rodgers has a higher QBR on play-action this season than Browns quarterback Baker Mayfield (93). But nobody defends against it better than Pittsburgh. Mayfield’s yards per attempt dips from 9.5 on play-action to 6.5 without it, and his completion percentage falls from 68% to 61%, so how the Browns’ run fakes work against the Steelers will go a long way in determining whether they can get their first playoff victory since Jan. 1, 1995.

Matt Bowen’s game key: What will the Browns change with a new playcaller on Sunday night (coach Kevin Stefanski will miss the game with COVID-19)? I want to see them stay on script. That means two- and three-tight end sets, gap and zone runs with Chubb and Kareem Hunt and defined throws for Mayfield off play-action. Read more.

Read More
A lightly edited version of this interview appeared in an issue of Sports Illustrated. In an interview conducted…
Read More